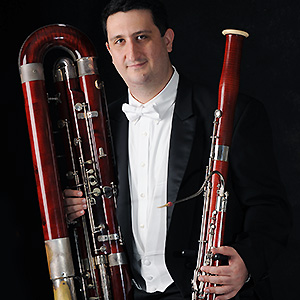 Benjamin Atherholt joined the Louisiana Philharmonic Orchestra as Assistant Principal Bassoonist and Contrabassoonist in 2006. Ben won this position while pursuing a graduate degree from the Shepherd School of Music at Rice University, where he studied with Benjamin Kamins.

From 2011-2013, Ben served as acting Contrabassoonist/Bassoonist with the Houston Symphony, and toured with them to Moscow and Carnegie Hall. Ben has also performed with the Alabama, Naples, and Mobile Symphonies, and spends his summers in Jackson Hole, Wyoming performing at the Grand Teton Music Festival.