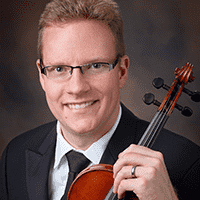 Benjamin Hart began playing violin at age 5 in his hometown of St. Louis Missouri. He joined the Louisiana Philharmonic Orchestra as Associate Concertmaster in January 2013. He also makes regular appearances with the IRIS Orchestra in Germantown, Tennessee. He has appeared at summer festivals in Colorado, Oregon, Idaho, and Aix-en-Provence, France. Ben earned a Masters in Music from Indiana University in 2012, where he studied with acclaimed concertmaster and soloist, Alexander Kerr. He received a Bachelor’s degree with honors from Vanderbilt University, where he studied with Christian Teal. His early studies in St. Louis were with Carrie Telthorst, Rebecca Markowski, Dr. Richard Kent Perry, and John McGrosso.

As a chamber musician, Benjamin performs a wide variety of music with the New Orleans-based Polymnia Quartet. He was previously a member of the Ars Nova Quartet, where he received training from the Emerson, Takács, Juilliard, Cleveland, Concord, and American String Quartets. He has also received recognition as a composer and arranger. Benjamin arranged and directed two hymn albums featuring his sibling ensemble, Harts on Strings. Benjamin has taught violin students of all ages and abilities. He is a registered Suzuki teacher, and maintains a small private studio. He and his wife and three children reside in Terrytown.