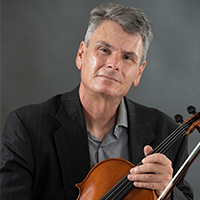 Bruce Owen has been the assistant principal viola of the Louisiana Philharmonic since 1999, after having been in the viola section as one of the founding members of the musician run orchestra.

Bruce earned his Bachelor’s and Master’s of Music degrees at the College-Conservatory of Music at the University of Cincinnati where he was the teaching assistant to Masau Kawasaki. He also spent two years at the Hochschule für Musik in Vienna, Austria, studying with Hatto Beyerle, formerly of the Alban Berg String Quartet. In addition, his training included coaching with the LaSalle and Tokyo Quartets.

In New Orleans, Bruce is the instructor of viola at Loyola University School of Music where he also coaches chamber music. In 2006, he founded Musaica, a chamber ensemble comprised of colleagues mostly from the LPO which presents a regular series of concerts featuring both new and less frequently heard works. The group, which was hailed by the Times-Picayune as “a triumph of musicianship and adventurous programming” won the Gambit “Tribute to the Classical Arts” award for best chamber music concert of 2007, and has been nominated almost every year since for its programs and performances of contemporary chamber music. Musaica’s website is www.musaica.org.

Bruce also takes an active role in music education for kids. He has served on the LPO’s education committee and helped organize its Young Artist Concerto Competition, and has been a board member of the Greater New Orleans Youth Orchestra (GNOYO). In addition, he teaches at GNOYO’s annual summer festival. Bruce has done master classes around the country including visits to the music schools at University of New Mexico, Texas Tech University, University of Southern Mississippi, University of Colorado, Florida State University, and the University of Oklahoma, among others. As a member of the American Viola Society, Bruce regularly participates in regional viola festivals.

Bruce spends his summers in the viola section of the Colorado Music Festival in Boulder, playing weekly orchestra concerts with musicians from around the country. While in Colorado, he has a goal to hike all of the state’s 14ers (the 54 peaks higher than 14,000 feet), and has done 42 of those as of 2018. Besides mountain climbing, Bruce also enjoys biking, photography, writing, and traveling by train.