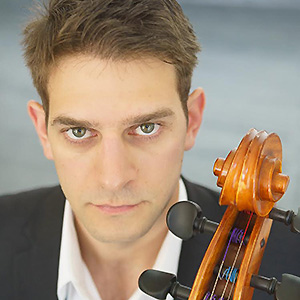 He has performed at numerous international festivals including those of Baden-­‐‑Baden and Salzburg, and has given chamber music concerts with such musicians as Alex Kerr,
Jorja Fleezanis, Steve Wryczynski, and members of the Vienna Philharmonic. He also serves as cellist for New Orleans based chamber ensemble Lyrica Baroque. At the invitation of Prince Nicolò Boncompagni Ludovisi, he presented a series of solo cello recitals at the famed Villa Aurora, Rome.

Originally from New Hampshire, Daniel Lelchuk studied with Eric Kim at the Indiana University Jacobs School of Music (Bloomington) where he received the Eva Heinitz scholarship and played as principal cello of the Indiana University Philharmonic and Opera orchestras. He began cello when not yet five, studying for ten years with Donna Denniston, followed by studies with Sato Knudsen (Boston Symphony Orchestra), and, for a year in Rome, with Francesco Strano (‘I Musici’ and the Accademia Nazionale di Santa Cecilia).

A founding member of the Castleton Chamber Players with violinist Eric Silberger, Daniel Lelchuk served from 2010-­2014 as principal cellist of the Castleton Festival under Maestro Lorin Maazel.