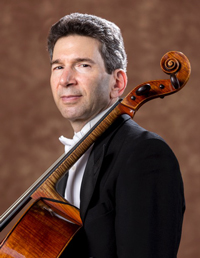 A native of Los Angeles, cellist David Rosen received his Bachelor of Music from the Cleveland Institute of Music, his Master of Music from the Eastman School of Music, and his Doctor of Musical Arts from the University of Miami. His major teachers include Stephen Geber and Steven Doane. Rosen was a winner of the Coleman Chamber Music Competition in Pasadena, California, and was a guest lecturer in chamber music studies at Tulane and Southeastern Louisiana University. He has participated in the music festivals of Aspen, Banff, Blossom, Boulder, Breckenridge, Chautauqua, Heidelberg, Steamboat Springs, as well as Heidelberg, Germany, and L’Aquila, Italy. Rosen has performed with the Cincinnati Symphony, San Diego Symphony, and the Los Angeles Opera. He was a member of the New Orleans Symphony from 1989-90 and has been a member of the Louisiana Philharmonic Orchestra since 1991.