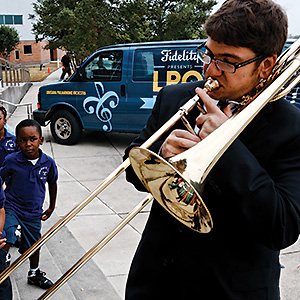 Evan Conroy is currently the bass trombonist with the Louisiana Philharmonic Orchestra, a position he has held since 2011. Evan is an in demand orchestral artist, performing with the Alabama Symphony, the Jacksonville Symphony, the Grand Rapids Symphony and the Lucerne Festival academy.

As a soloist, Evan has had success in competitions, winning the United States Army Band’s National Bass Trombone Solo Competition, division II, in 2008. He was a runner up for that same competition in 2007. He was also a finalist for the prestigious Donald Yaxley award, presented by the ITA. Evan has participated in music festivals around the world, including the Lucerne Festival, the Round Top Music Festival, and the Bayview Music festival.