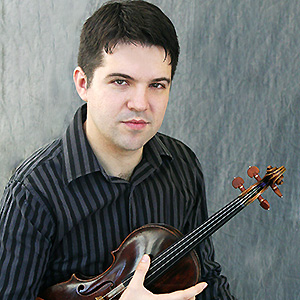 Gabriel Platica is a native of Romania. He began studying the violin at the age of 6 at the George Enesco School of music in Bucharest.

At 11 Gabriel performed live on the Romanian television and at 12 he won the Bucharest Interpretation contest. He graduated from the Repton School of Music in Derbyshire, England where he appeared on a BBC broadcast dedicated to his performance of the Tchaikovsky violin concerto.

He received a Bachelor degree from the Royal Northern College of Music in Manchester on a scholarship from Her Royal Highness, The Dutchess of Kent. He holds a Masters Degree from Southeastern University in Hammond, Louisiana and is pursuing in a doctoral degree at the University of Minnesota. He is the recipient of numerous awards, among them the first prize at the Derbyshire Violin Competition in England, and the MTNA Competition at the violin division in Louisiana. Gabriel won the Joseph Gingold award at Kent/Blossom Festival in 2002 and received the 2003 scholarship from the Virtu foundation. He was a member of the BournemouthSinfonietta, Memphis Symphony and assistant concertmaster of the South Dakota Symphony.  He was also a substitute violinist of the Chicago Symphony, Minnesota Orchestra and Saint Paul Chamber Orchestra.