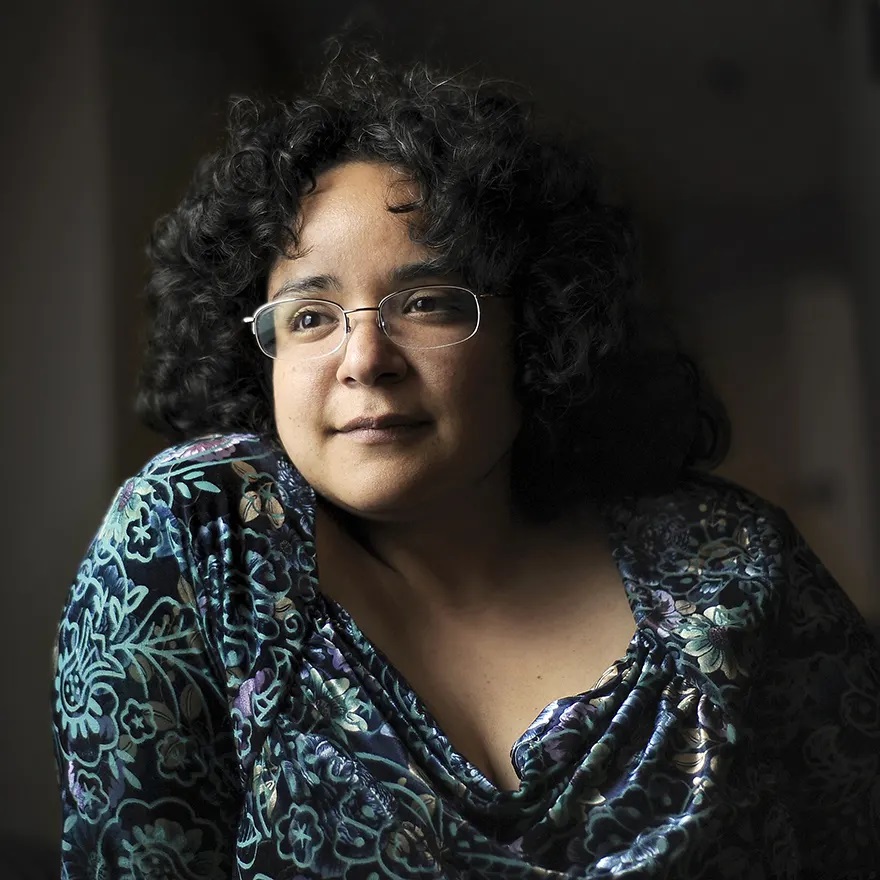 Currently serving as Composer-in-Residence with the storied Philadelphia Orchestra and included in the Washington Post’s list of the 35 most significant women composers in history (August, 2017), identity has always been at the center of composer/pianist Gabriela Lena Frank’s music. Born in Berkeley, California (September, 1972), to a mother of mixed Peruvian/Chinese ancestry and a father of Lithuanian/Jewish descent, Gabriela explores her multicultural heritage through her compositions. Inspired by the works of Bela Bartók and Alberto Ginastera, Gabriela has traveled extensively throughout South America in creative exploration. Her music often reflects not only her own personal experience as a multi-racial Latina, but also refract her studies of Latin American cultures, incorporating poetry, mythology, and native musical styles into a western classical framework that is uniquely her own.

Moreover, she writes, “There’s usually a story line behind my music; a scenario or character.” While the enjoyment of her works can be obtained solely from her music, the composer’s program notes enhance the listener’s experience, for they describe how a piano part mimics a marimba or pan-pipes, or how a movement is based on a particular type of folk song, where the singer is mockingly crying. Even a brief glance at her titles evokes specific imagery: Leyendas (Legends): An Andean Walkabout; La Llorona (The Crying Woman): Tone Poem for Viola and Orchestra; and Concertino Cusqueño (Concertino in the Cusco style). Gabriela’s compositions also reflect her virtuosity as a pianist — when not composing, she is a sought-after performer, specializing in contemporary repertoire.

In 2020, Gabriela was a recipient of the prestigious 25th anniversary Heinz Award in the Arts and Humanity category with an unrestricted cash prize of $250,000, a meaningful portion of which was donated by Gabriela to the Gabriela Lena Frank Creative Academy of Music. The award recognized Gabriela for breaking gender, disability, and cultural barriers in the classical music industry, and for her work as an activist on behalf of emerging composers of all demographics and aesthetics.

Winner of a Latin Grammy and nominated for Grammys as both composer and pianist, Gabriela also holds a Guggenheim Fellowship and a USA Artist Fellowship given each year to fifty of the country’s finest artists.  Her work has been described as “crafted with unself-conscious mastery” (Washington Post), “brilliantly effective” (New York Times), “a knockout” (Chicago Tribune) and “glorious” (Los Angeles Times).  Gabriela is regularly commissioned by luminaries such as cellist Yo Yo Ma, soprano Dawn Upshaw, the King’s Singers, the Cuarteto Latinoamericano with guitarist Manuel Barrueco, Brooklyn Rider, and conductors Marin Alsop and Yannick Nézet-Séguin.  She has also received orchestral commissions and performances from leading American orchestras including the Chicago Symphony, the Boston Symphony, the Atlanta Symphony, the Cleveland Orchestra, the Philadelphia Orchestra and the San Francisco Symphony.  Before her current residency with the Philadelphia Orchestra for which she will compose the 45-minute Chronicles of the Picaflor (Hummingbird), in 2017 she completed her four-year tenure as composer-in-residence with the Detroit Symphony under maestro Leonard Slatkin, composing Walkabout: Concerto for Orchestra,  as well as a second residency with the Houston Symphony under Andrés Orozco-Estrada for whom she composed the Conquest Requiem, a large-scale choral/orchestral work in Spanish, Latin, and Nahuatl, the language of the Aztecs.  Gabriela’s most recent premieres have been Apu: Tone Poem for Orchestra commissioned by Carnegie Hall and premiered by the National Youth Orchestra of the United States under the baton of conductor Marin Alsop; and Suite Mestiza, a large-scale work for solo violin premiered by Movses Pogossian.   In the season of 2022-23, San Diego Opera will premiere Gabriela’s first opera, The Last Dream of Frida and Diego, utilizing words by her frequent collaborator Pulitzer Prize winning playwright Nilo Cruz.  In the 2018-19 school year, Gabriela also became visiting Artist-in-Residence at the Blair School of Music with Vanderbilt University, and currently serves as Composer-in-Residence at the Caines School of Music at Utah State University through 2024, adding to her long list of residencies at universities and conservatories through the US.

Gabriela is the subject of several scholarly books including the W.W. Norton Anthology: The Musics of Latin America; Women of Influence in Contemporary Music: Nine American Composers (Scarecrow Press); and In her Own Words (University of Illinois Press).  She is also the subject of several PBS documentaries including “Compadre Huashayo” regarding her work in Ecuador composing for the Orquestra de Instrumentos Andinos comprised of native highland instruments; and Música Mestiza, regarding a workshop she led at the University of Michigan composing for a virtuoso septet of a classical string quartet plus a trio of Andean panpipe players. Músic Mestiza, created by filmmaker Aric Hartvig, received an Emmy Nomination for best Documentary Feature in 2015.

Civic outreach is an essential part of Gabriela’s work.  She has volunteered extensively in hospitals and prisons, with her current focus on developing the music school program at Anderson Valley High School, a rural public school of modest means with a large Latino population in Boonville, CA.

Gabriela is also a climate activist, co-authoring a regular column on climate action within the music industry for Chamber Music America Magazine and creating a Climate Commitment for GLFCAM.

In 2017, Gabriela founded the award-winning Gabriela Lena Frank Creative Academy of Music whose history and mission can be found here.

Gabriela attended Rice University in Houston, Texas, where she earned a B.A. (1994) and M.A. (1996). She studied composition with Sam Jones, and piano with Jeanne Kierman Fischer. At the University of Michigan, where she received a D.M.A. in composition in 2001, Gabriela studied with William Albright, William Bolcom, Leslie Bassett, and Michael Daugherty, and piano with Logan Skelton.  She currently resides in Boonville, a small rural town in the Anderson Valley, with her husband Jeremy on their mountain farm, has a second home in her native Berkeley in the San Francisco Bay Area, and has traveled extensively in Andean South America.

Gabriela is a member of G. Schirmer’s prestigious roster of artists, exclusively managed and published.