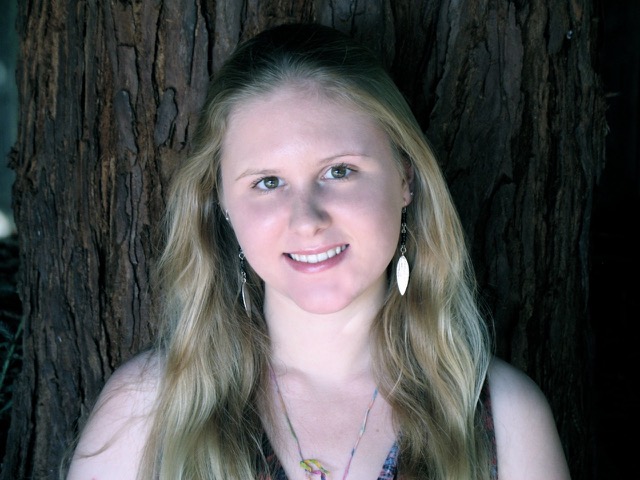 Gabriella Smith is a composer and environmentalist. She grew up in the San Francisco Bay Area playing and writing music, hiking, backpacking, and volunteering on a songbird research project in Point Reyes. Whether for orchestras, chamber ensembles, voices, or electronics, Gabriella’s music comes from a love of play, exploring new sounds on instruments, building compelling musical arcs, and connecting listeners with the natural world.

Many of Gabriella’s works address the climate crisis and participation in climate solutions. Through her music, she often tries to provide listeners with an emotional connection to the natural world in an invitation to action. In response to the biodiversity crisis, Gabriella’s Requiem is a 25-minute work for 8 singers and string quartet, written for Roomful of Teeth and Dover Quartet and commissioned by Bravo!Vail in 2018. Instead of the traditional Requiem text, the text of Gabriella’s Requiem is a list of the scientific (Latin) names of all the species that have become extinct in the last 100 years. Gabriella’s first full-length album, Lost Coast, deals with the grief, loss, rage, and fear experienced as a result of climate change, as well as the exhilaration, beauty, and wonder she has felt in the world’s last wild places and the joy and hope in getting to work on climate solutions. Originally conceived as a cello concerto, Lost Coast was written for and recorded with cellist Gabriel Cabezas, violist/producer Nadia Sirota, Gabriella singing, and all three of them playing found-object percussion. Lost Coast was recorded at Greenhouse Studios in Iceland and released on Bedroom Community. Gabriella has also written many works inspired by field recordings she has made of terrestrial and underwater soundscapes, including the sounds of dawn choruses, trees, cacti, tide pools, and coral reefs. Her upcoming work is dedicated to climate solutions through a number of exciting initiatives currently in development.

Described as “high-voltage and wildly imaginative” (Philadelphia Inquirer), and “the coolest, most exciting, most inventive new voice I’ve heard in ages” (Musical America), Gabriella’s music has been performed all over the world by yMusic, Aizuri Quartet, Attacca Quartet, Eighth Blackbird, Bang on a Can All-Stars, Roomful of Teeth, Dover Quartet, PRISM Quartet, LA Phil, San Francisco Symphony, Nashville Symphony, Oregon Symphony, and the Cabrillo Festival Orchestra, among others.

Recent highlights include the premiere of Gabriella’s organ concerto, Breathing Forests, written for James McVinnie and LA Phil, conducted by Esa-Pekka Salonen; and the premiere of music from Lost Coast for solo cello and electronics performed by Gabriel Cabezas on the New York Phil’s Nightcap series, curated by Nadia Sirota and Steve Reich. In April 2020, pianist/composer Timo Andres gave the online premiere of Gabriella’s new work Imaginary Pancake for solo piano following the cancellation of his Carnegie debut recital due to the COVID-19 pandemic. Currently she is working on a version of Lost Coast for cello and orchestra, to be premiered by Gabriel Cabezas and LA Phil in May 2023, conducted by Gustavo Dudamel as well as a live string/vocal/electronics duo version of Lost Coast she will debut with Gabriel Cabezas at the Philharmonie de Paris.

Gabriella’s string quartet Carrot Revolution was written for and recorded by the Aizuri Quartet on their Grammy-nominated debut album Blueprinting. Her music has also been recorded by yMusic (Maré and Tessellations on their album Ecstatic Science), Matt Haimovitz (bare on his album Primavera I: the wind), Friction Quartet (Inyo on Rising), Duo Noire (Loop the Fractal Hold of Rain on Night Triptych), Latitude 49 (Number Nine on Wax and Wire), Bang on a Can All-Stars (Panitao on more field recordings), and PRISM Quartet (Spring/Neap on The Curtis Project).

Gabriella has held residencies with the Nashville Symphony; Instituto Sacatar on the island of Itaparica in Bahia, Brazil; and a Copland House Residency at Aaron Copland’s home in upstate New York. She has received grants and awards from BMI, ASCAP, New Music USA, the Barlow Endowment, American Modern Ensemble, and the Theodore Presser Foundation, among others.

Gabriella received her Bachelors of Music in composition from the Curtis Institute of Music and later returned to Curtis as an ArtistYear Fellow, dedicating a citizen-artist year of national service in the Philadelphia region. She attended Princeton University for graduate school. Her mentors have included Arkadi Serper, John Adams, David Ludwig, Steve Mackey, Dan Trueman, and Donnacha Dennehy.

When not composing, she can be found hiking, backpacking, birding, recording underwater soundscapes with her hydrophone, and volunteering on ecosystem restorations. She currently lives in Seattle.