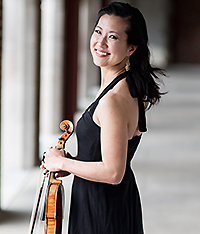 Hannah Yim joined the Louisiana Philharmonic Orchestra in 2007. She has a BM and MM in music performance from the Jacobs School of Music, Indiana University, where she studied with Alexander Kerr and Henryk Kowalski. She previously studied with William Kennedy in her hometown of Irvine, California.

Hannah has played with numerous other orchestras including the New World Symphony, Louisville Orchestra, Evansville Philharmonic Orchestra, and Columbus Indiana Philharmonic. She is also an avid chamber musician, and has performed in the UC Berkeley Wednesday Noon Concert series, the Trinity Artist series at Trinity Episcopal Church, Bach Around the Clock, and the Champagne chamber series at the Breckenridge Music Festival where she currently spends her summers. She was also a member of the National Repertory Orchestra in 2005-6, and the Mendocino Music Festival in 2000. Hannah has also enjoyed collaborations in ethnic and folk idioms, performing with Pablo Ziegler in 2007, and with Anat Cohen in the Lotus World Music and Arts Festival later that year. In her free time, Hannah enjoys visiting galleries, cooking for friends, photography, reading, and dancing. She currently maintains a small teaching studio in Houma, LA.