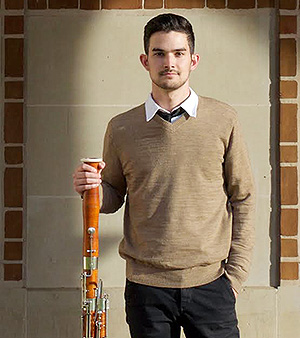 Bachelor of Music – The Colburn School Conservatory of Music

A recent addition to the orchestra, Jack Peña joined the Louisiana Philharmonic as Principal Bassoonist in 2016. Born and raised in Dallas, Texas, Jack began his musical studies at age eleven. After making his way around the woodwind family, studying a new instrument each year, he finally began his bassoon studies at age fourteen. A few years after, the New York Times hailed him for his “deft solo work” in performances at Carnegie Hall with the 2013 New York String Orchestra Seminar. That same year, he was awarded First Prize in The Pasadena Showcase House for the Arts Instrumental Competition, adjudicated by members of the Los Angeles Philharmonic.

Also an active soloist, Mr. Peña most recently performed Villa-Lobos’ Ciranda Das Sete Notas with the 2016 Spoleto Festival USA Orchestra in Charleston, SC under the baton of Maestro Norman Huynh. His other solo appearances include the Strauss Duett-Concertino, Haydn Sinfonia Concertante, and Rossini Concerto with the Colburn Orchestra both in their subscription and outreach seasons.

Mr. Peña has spent his summers as a fellow at the Tanglewood Music Center, Music Academy of the West, Spoleto Festival USA, and Aspen Music Festival and School. Mr. Peña received his Bachelor of Music degree from The Colburn Conservatory of Music, where he studied with Richard Beene and has completed a partial Master of Music degree at Rice University’s Shepherd School of Music where he studied with Benjamin Kamin