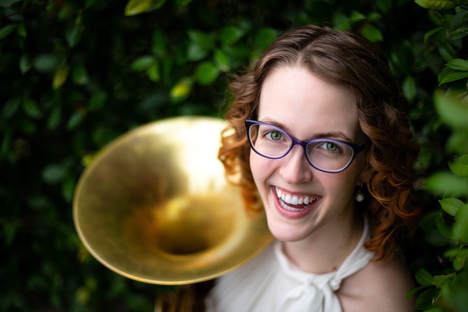 Jamie joined the Louisiana Philharmonic Orchestra as 2nd horn in 2018.  A native of the Chicago area, Jamie started on horn in the 5th grade.  With musical parents who are also refined brass players, there was really no avoiding falling in love with classical music.

In 2013, Jamie received her Bachelor’s degree from Indiana University’s Jacobs School of Music, where she studied with world renowned horn players, Dale Clevenger and Jeff Nelsen.  During her junior year, Jamie had the opportunity for a semester abroad in Vienna, Austria, where she studied with Wolfgang Vladar, 3rd horn of the Vienna Philharmonic. Shortly after, Jamie graduated with a Master’s degree from DePaul University, under the tutelage of Jim Smelser and Oto Carrillo of the Chicago Symphony.  Jamie was accepted as an associate member of the Civic Orchestra of Chicago, where she played alongside Yo-Yo Ma in their artistic challenge program, conducted by LPO’s very own, Carlos Miguel Prieto.

In her free time, Jamie practices yoga, adores teaching when she gets the chance, enjoys baking, cooking, reading, and spending time with her cats, Remy and Eleanor Rigby.