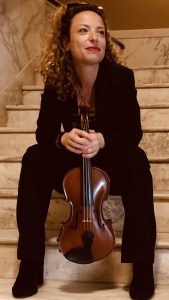 Bulgarian violinist Janeta Mavrova has been a member of the Louisiana Philharmonic Orchestra since February, 2007.

Born into a family of professional musicians and Janeta Mavrova began her studies at the age of four. She graduated from the Bulgarian National Conservatory with a Bachelor’s Degree and the Florida State University with a Master’s Degree of Violin Performance, where she studied with prof. Beth Newdome and prof. Eloit Chapo. While pursuing her Master’s Degree, Janeta was a finalist of the MTNA Young Artist’s Concerto Competition in Florida State for 2005.

As a concertmaster and soloist of the Europalia Chamber Orchestra, she received the Bulgarian Ministry of Foreign Affairs Prize for Best Performance at Europalia Music Festival, Belgium. As an active chamber musician, Janeta has performed at different music festivals and concert series throughout Europe and the US, including the International Varna Summer Festival, Bulgaria, the Europalia Music Festival, Brussels and the New Music Festival, Florida. As an orchestra player she has toured extensively with the Orpheus Chamber Orchestra, the Youth Symphony Orchestra and the Bulgarian National Radio Orchestra throughout Austria, Hungary, Germany, Italy, Spain, Belgium and Bulgaria.