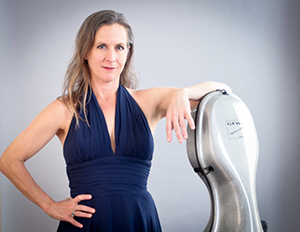 Jeanne Jaubert joined the LPO in 1998.

Originally from Texas, she holds a Bachelor of Music from Rice University where she studied cello with Shirley Trepel. She then became a student of Zara Nelsova and earned both Masters and Doctoral degrees from Rutgers University in New Jersey. She was glad to get a job in New Orleans because if she’d stayed in New Jersey much longer she would have had to start saying she was from there (no offense to anyone, she passed a splendid five years there, really … it is “the Garden State”).

Jeanne is an experienced and dedicated teacher, and she also enjoys performing solo and chamber music concerts outside of the LPO. Nolacelli, the cello quartet of which she is a member, has a repertoire of eclectic and exciting music and is available for recitals and other events.

Also an accomplished dancer and choreographer, Jeanne has been thrilled to be able to pursue that passion alongside her musical career. Since founding the New Orleans-based contemporary dance company Happensdance in 1999 she has created over twenty new works for the group. Her work has garnered numerous “Big Easy” Classical Arts awards and nominations and has received support from the Arts Council of New Orleans, the Mobile Arts Council, and the Louisiana Division of the Arts from whom she received the 2002 Arts Fellowship in Choreography. Of her solo “Bourbon Street Story”, the New York Times’ Jennifer Dunning wrote that it “evoked an entire city”.

Jeanne lives in New Orleans with her daughter Sif and their two dogs Willie Nelson and Cornbread.