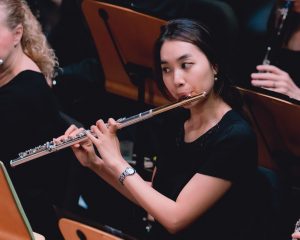 Masters of Music – Orchestral Performance, Manhattan School of Music
Bachelor of Music and Accelerated Master of Music – The Juilliard School

Admired for her “pure poetry” and “beautiful technique and sound” (NFA Chronicle), Ji Weon Ryu holds The Mary Freeman Wisdom Chair as the Principal Flute of the Louisiana Philharmonic Orchestra since 2019 and serves in the same capacity with the Grammy-winning Albany Symphony Orchestra since 2017.

Over the course of her young career, Ji Weon has been a guest flutist with distinguished ensembles such as the New York Philharmonic and the Verbier Festival Orchestra and has been a soloist with the Seoul Philharmonic Orchestra, Seoul Chamber Orchestra and the Louisiana Philharmonic Orchestra. As a soloist, chamber and orchestral musician, she has performed in venues including Alice Tully Hall, Carnegie Hall, David Geffen Hall, Dvorak Hall (Prague), The John F. Kennedy Center, Musikverein (Vienna), and Seoul Arts Center.

With her unparalleled flexibility and virtuosity in a diverse panoply of musical styles, Ji Weon has won First Prize at the 2017 Artur Balsam Duo Competition, the 2016 New York Flute Club Competition, and the 38th National Flute Association Soloist Competition along with the Best Performance of Newly Commissioned Piece Award, and has received the 2017 Young Artist Award from the Kumho Asiana Cultural Foundation in South Korea. Ji Weon has performed extensively as a recitalist and a chamber musician all over the US and South Korea.

She regularly tours with the Frisson, an “explosive” New York City-based chamber ensemble as a founding member, and is a co-founder and the artistic committee of the Ensemble Blank, a contemporary group based in Seoul that strives to push boundaries of classical music repertoire and searches for unconventional concert venues.

In addition to her appearance on stage, Ji Weon is also committed to teaching. She has given guest lectures and masterclasses at The Juilliard School, Manhattan School of Music, Berklee College of Music, Louisiana State University, Tulane University, and the University of Kansas.

Apart from sharing classical music with audiences, Ji Weon enjoys arranging and performing pop tunes at the popular Instagram/YouTube channel, JHM Jams. One of the videos she featured has over 52k views and has been recognized by entertainment studio, Lionsgate and fashion magazine, Glamour. ​ Ji Weon holds a Master of Music degree in orchestral performance from Manhattan School of Music and both a Bachelor of Music degree and an Accelerated Master of Music degree from The Juilliard School. Her principal teachers include Robert Langevin, Carol Wincenc, and Young Ji Song.