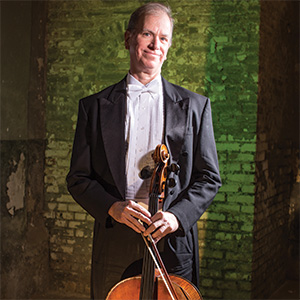 Jonathan Gerhardt, principal cello, has been a member of the Louisiana Philharmonic Orchestra since 1995. Originally from Columbus, Ohio, he grew up in a musical family and began taking cello lessons from his mother at the age of ten. Gerhardt received his Bachelor of Music degree and Performers Certificate from the Eastman School of Music and his Master of Music Degree from the New England Conservatory of Music. His primary teachers include Paul Katz, and Colin Carr.

Jonathan has been a member of the Honolulu Symphony, Naples Philharmonic, and the Dayton Philharmonic. During the summers, he has participated in the Aspen, Banff, Spoleto and Colorado Music Festivals. He is on the faculty of Tulane University and a member of the Tulane Piano Trio. Jonathan and his partner Richard Woehrle live Uptown with their two cats Penny and Spike.