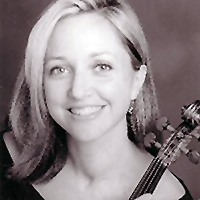 Judith Armistead Fitzpatrick, violin, has been a member of the Louisiana Philharmonic Orchestra since the 1998-99 season. Previously she performed with the New World Symphony in South Miami Beach.

While with the New World Symphony, Judith worked with Michael Tilson Thomas (Artistic Director) and performed extensively both in the U.S. and abroad including Europe, Central America and the Caribbean. Judith also teaches, and she has taught for two summers at The Brevard Music Center and is a member of The Suzuki Association of America.

Previously, Judith performed at the Echternach Music Festival in Luxembourg, and the Spoleto Music Festival in Spoleto, Italy. In 2001, she performed throughout South Africa and Zimbabwe with composer and conductor John Rutter. Active as a chamber musician, Judith has played in the Cellini String Quartet and the Coronado Piano Trio, as well as Klezmer and Bassa Nova ensembles.