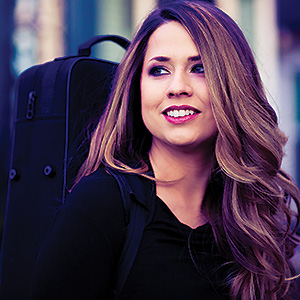 The daughter of a Kenner native, Kate Withrow began her studies with the violin at the age of five in Austin, Texas.

She was first trained in the Suzuki Method and then progressed under the guidance of Leonard Posner, winning the 1999 Pearl Amster Young Artist Competition. She then continued her studies with Andrzej Grabiec at the University of Houston and Mauricio Fuks at Indiana University.

Ms. Withrow has given many solo and chamber performances in festivals throughout the country and abroad including the Aspen Summer Music Festival, the Orford Centre for the Arts in Quebec, and the Mozarteum Sommerakademie in Austria. After the completion of a Performer’s Diploma at Indiana University, she was selected to be a regular member of the Chicago Civic Orchestra for the 2006-2007 season. That same year, she was invited to join the Louisiana Philharmonic Orchestra.

Ms. Withrow has always had a great passion for teaching and considers education one of the most important elements of her role as a musician. In addition to teaching a small private studio in New Orleans, Ms. Withrow is also on faculty at the Louisiana Academy of Performing Arts.

Ms. Withrow will soon be featured in the webzine “Grinding the Apparatus” for her work with the Indiana-based band Basilica. The band, which incorporates grindcore idioms with classical composition technique, has performed in numerous venues from Chicago to New York.