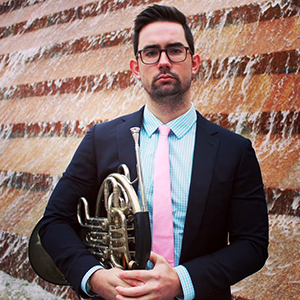 Kevin Winter is 3rd horn of the Louisiana Philharmonic Orchestra after spending his first two years as 4th horn. He is currently on faculty at Loyola and Tulane Universities and maintains a private teaching studio. He completed his bachelor’s degree at Baylor University, studying with Jeff Powers. He also holds a master’s degree from the Cleveland Institute of Music, where he studied with Rick Solis. His other influences include Greg Hustis, David Cooper, and Haley Hoops.   He has spent previous summers with the Des Moines Metro Opera, National Repertory Orchestra, National Orchestral Institute, and Opera in the Ozarks. In his free time Kevin is an ardent fan of the Texas Rangers and tacos. He also enjoys bouldering and brewing his own beer, and he is his mother’s favorite horn player.