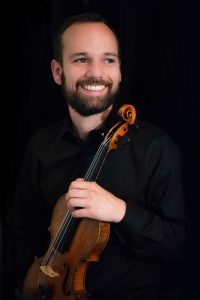 Based in New Orleans, Kurt Munstedt is an active violinist, music educator, and a member of the Louisiana Philharmonic Orchestra since 2017. A passionate chamber musician, he is currently a member of the Radio Bird Quartet, Rogue Baroque, and the Lott String Quartet (currently quartet-in-residence at the University of New Orleans). Originally from Needham, Massachusetts, he holds Bachelor of Music degrees in violin and audio recording from the Cleveland Institute of Music, and a Masters degree from Carnegie Mellon. His principal teachers include Joel Smirnoff and Andres Cardenes. He has performed with the Schleswig Holstein Festival Orchestra (Germany), Pacific Music Festival (Japan), The Sebastians (NYC), and Breckenridge Music Festival. Kurt received his Suzuki training under the guidance of Kimberly Meier-Sims, and teaches an enthusiastic studio of students from the front of his historic shotgun house in the Lower 7th Ward.