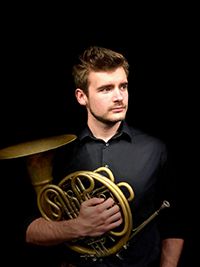 Mark Trotter first picked up a trumpet in 5th grade. After three weeks, he switched to the Horn and never looked back. In high school, Mark studied with Carolyn Wahl and had the honor of performing with the National Youth Orchestra of the United States under the baton of Charles Dutoit in Carnegie Hall. For the last three years, he has studied at Northwestern University with Gail Williams and Jon Boen, playing with the Northwestern University Symphonic Orchestra on their 2018 China Tour. The past two summers, Mark has attended the Aspen Summer Music Festival, working with John Zirbel. This year, Mark is thrilled to join the Louisiana Philharmonic as their 4th Horn while finishing his Bachelor’s Degree at Northwestern. In his free time, Mark enjoys working out, strategy games, and any good book.