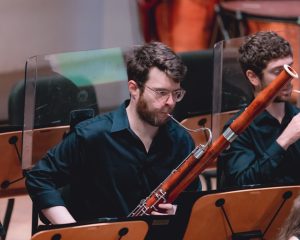 Michael Matushek joined the Louisiana Philharmonic Orchestra as second bassoonist in 2012. He has performed as a guest bassoonist and contrabassoonist with the Alabama, Houston, Jacksonville, and New World symphony orchestras, the Houston Grand Opera, and CityMusic Cleveland. His summer engagements have included orchestral and chamber performances with La Orquesta Sinfónica de
Minería and the Artosphere, Breckenridge, Eastern, and Spoleto music festivals.

A passionate educator, Michael is the bassoon instructor for Xavier University of Louisiana and the Greater New Orleans Youth Orchestra, and has presented masterclasses at universities throughout the region. He served as a faculty member of the Eastern Music Festival in Greensboro, North Carolina, and for two summers was a teaching assistant at Interlochen Arts Camp. Michael also maintains a small private studio, and has been proud to see his former students go on to perform on NPR’s From the Top, play in All-State bands and orchestras, and gain admission to top music schools such as Colburn, Rice, and the University of Texas.

In addition to his musical activities, Michael takes an active role in the LPO’s governance as a member of the Board of Trustees, where he currently serves as co-chair of the Finance committee. He feels fortunate that the LPO’s unique, collaborative model allows him this
opportunity to help the orchestra fulfill its mission, “to transform people and communities through music.”

Originally from Dallas, Texas, Michael holds a Master of Music degree from Rice University’s Shepherd School of Music and a Bachelor of Music degree from the Oberlin College Conservatory of Music, where he studied with Ben Kamins and George Sakakeeny, respectively. In 2012, he represented the Shepherd School at the Kennedy Center in Washington, D.C. as part of The Conservatory Project. As a student, he earned fellowships to the Music Academy of the West and National Repertory Orchestra.

Michael lives in Gentilly with his wife, LPO violist Catherine Matushek, where they enjoy cooking new cuisines and fostering neonatal kittens for the Louisiana SPCA. He also enjoys solving and constructing crossword puzzles and playing the piano and recorder.