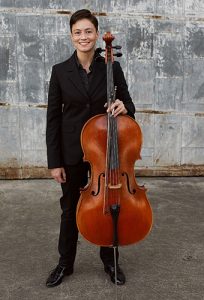 Rachel has worked with numerous movie, television and recording artists including Tyler Perry, Disturbed, Evanescence, Edgar Meyer, PJ Morton and Idina Menzel. She has also appeared in television shows such as “NCIS: New Orleans” and “On Becoming a God in Central Florida.” She is a multi-year winner of Gambit Magazine’s Best Chamber Music Performance.

She has participated in numerous festivals and projects including the Castleton Festival Orchestra with Lorin Maazel, YouTube Symphony with Michael Tilson Thomas, the Civic Orchestra of Chicago, Orquesta Sinfónica de Minería in Mexico City, the AIMS Festival Orchestra in Graz, Austria, and the National Repertory Orchestra.

Rachel is originally from Flint, Michigan. She holds a bachelor’s degree in cello performance at the University of Michigan, where she studied with Erling Blöndal Bengtsson. Rachel was the recipient of the Gregor Piatigorsky Scholarship at the Peabody Conservatory, where she earned a master’s degree and a performance diploma, under the tutelage of Alan Stepansky, former associate principal cello of the New York Philharmonic.