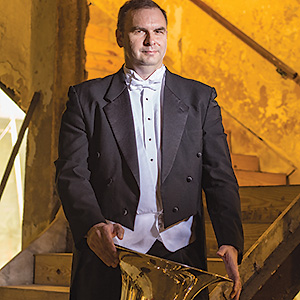 Mr. Nuñez is currently Adjunct Professor of Tuba and Euphonium at both the Tulane University and the University of New Orleans. He has held previous appointments as Professor of Tuba at both Delgado University and Loyola University New Orleans, as well as serving as Brass Instructor for the Phantom Regiment Drum and Bugle Corps from 1988-1996. In 2006, Mr. Nuñez performed with both the New York Philharmonic and the Nashville Symphony in a series of collaborative concerts with the Louisiana Philharmonic Orchestra.

Born in New Orleans and raised in Chalmette, Louisiana, Robert’s family has robust historical roots as ancestors from both branches of his family were colonists who preceded the Louisiana Purchase; the Cantrell family arriving to New Orleans in 1724, and the Nuñez family residing in St. Bernard Parish in 1789. Robert Nuñez is the great-grandson of Alcide “Yellow” Nuñez, the pioneer Dixieland clarinetist who performed with the Original Dixieland Jazz Band, Louisiana Five, The Moonlight Serenaders, and Papa Jack Laine’s Reliance Brass Bands from 1912-1934.

A diverse and eclectic artist, Mr. Nuñez demonstrates exceptional proficiency as a soloist and performer within a myriad of ensembles and musical genres (orchestral, opera, chamber, choral, Dixieland, Jazz, rock et. al.). Mr. Nuñez’s solo presentations include his performance of Ralph Vaughan Williams’ Tuba Concerto in f minor with the Louisiana Philharmonic in the 1999-2000 season, and his presentation of the Concerto for Horn No. 1 in Eb by Richard Strauss with the New Orleans Concert Band in May 2010. Mr. Nuñez has performed with numerous brass ensembles; including the Fanfare Brass Quintet, a school outreach ensemble for disadvantaged children. He is a founding member of both the New Orleans Uptown Brass quintet and the Houston Metropolis Brass Quintet. Mr. Nuñez has appeared with the Louisiana Repertory Jazz Ensemble, and remains active in many Dixieland groups both in and around New Orleans. Robert Nuñez has twice joined forces with Ray Charles and his Orchestra, played with both of the rock bands’ Kansas and The Moody Blues, and performed with luminary jazz pianist and composer Dave Brubeck and his quartet during a joint endeavor between Dave and the Baltimore Choral Arts Society.