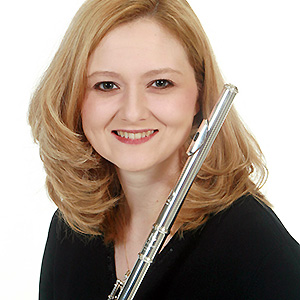 Sarah Schettler joined the Louisiana Philharmonic Orchestra as Second Flutist in September of 2007. She holds a Bachelor of Music in Flute Performance from Millikin University, Master of Music degrees in Flute Performance and Musicology from the University of North Texas, and a Doctor of Music from The Florida State University. In 2005, she was one of six flutists worldwide to be accepted into Trevor Wye’s Flute Studio, located in southern England. Her former teachers include Terri Sundberg, Charles DeLaney, Stephanie Jutt, and Trevor Wye.

Before moving to New Orleans, Sarah served as Assistant Professor of Music at Texas A&M University-Kingsville, where she taught flute and music theory, and Columbus State University, where she taught applied flute. She has performed with the Corpus Christi and Victoria Symphonies in south Texas and with the Orquestra Sinfonica de U.A.N.L. in Monterrey, Mexico. Sarah was a semifinalist in the 2004 National Flute Association Young Artist Competition and first prize winner in the 2005 Flute Society of Kentucky Young Artist Competition. She has performed at the National Flute Association’s conventions in Dallas, Nashville, and New Orleans.

As an educator, Sarah serves as the flute instructor at Tulane University and the University of New Orleans. She also maintains a private studio out of her home, where she teaches beginners through adults. Many of her students have successfully auditioned for Louisiana All-State, area Honor Bands, and have continued as music majors at the university level. During the summers, she teaches at New England Music Camp in Sidney, Maine.

As a member of the musician-owned Louisiana Philharmonic Orchestra, Sarah has served on its Education, Artistic Partnership, and Musicians’ Committees and as both Corporate Secretary and Vice President.

Sarah lives in Broadmoor with her husband, Bill, a bassist in the Louisiana Philharmonic Orchestra, and her miniature schnauzer, Rudy. When she’s not practicing or teaching, she can be found working on a home renovation project.