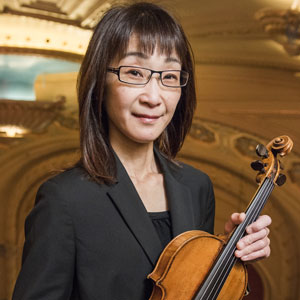 Violinist Yuki Tanaka has been a member of the Louisiana Philharmonic Orchestra since January 2000. She has served an Associate Concertmaster as well as acting Assistant Concertmaster with the orchestra. Before joining the LPO, she performed with the Santa Barbara Chamber Orchestra, the San Bernardino Symphony Orchestra, and the Asia America Symphony. She has freelanced throughout Los Angeles.

Born in Japan, Yuki began her violin studies at the age of three. At age eight, she made her recital debut. She attended the Toho School of Music, High School and College Division, before moving to the United States and transferred to the University of Southern California in 1992. As a recipient of Jascha Heifetz scholarship, she has earned Bachelor of Music, Master of Music, and Advanced Studies Performance Certification from USC. Her principal teachers include Angela Eto, Toshiya Eto, and Eudice Shapiro.

Ms. Tanaka gives solo recitals regularly, and has performed in Los Angeles, New Orleans, Tokyo, Nagano, and Kawasaki. As a chamber musician, she plays with numerous groups, including New Orleans based ensemble “Musaica” of which she is one of the founding members. In December 2005, while displaced by Katrina, Yuki organized “the Hurricane Benefit Concert” in Tokyo to raise money for the LPO.

Yuki maintains her private studio in the Mid-City area, and also teaches at the University of New Orleans and the New Orleans Baptist Theological Seminary.   During the summer, she appears in concerts with the Nagoya Philharmonic Orchestra in Japan.